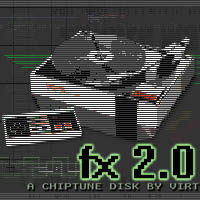 Ladies and gentlemen, back for an encore, and WHAT an encore, it's our friend and yours, the incorrigible, indelible Jake Kaufman, also known as Virt, with the second installment of his astounding NES chip disc, now known as 'fx 2.0'.

Since the mtk.release of the original 'fx', which was an entire imaginary NES soundtrack in pint-size .S3M format, Jake has been doing demi-deific stuff with Nintendo's sound chips in his primary career as a game musician. His "Atlantis: The Lost Empire" (Disney) and "Scorpion King" (Universal) soundtracks on Gameboys Color and Advanced respectively showcase his amazing skills, and his newly released soundtrack to Capcom's "Shantae" on Gameboy Color is, quite frankly, one of the best ever GBC scores, as well as being one of the last.

But this time, Virt posed an intriguing question - what if he was given the job of re-scoring classic-era Nintendo titles from Konami? So, he revved up his Delorean trackball, took things back 15 years, and we have these absolutely astounding pieces of NES sound-chip nirvana, with completely new tracks made for classic Nintendo videogames as if Jake were actually soundtracking them at the time.

So, whether he be bustin' moves out for "Gyruss" in the divine "Blastoff", which comes complete with a 'bonus beats' mp3 version, arranged Playstation-remake stylee, or a new "Option" theme for the classic "Gradius 2", it _all_ hits the spot. And carrying on right through to the afterburner-effect burn-up of "Bogey At Your 6" for "Top Gun", a pair of Renaissance efforts for the "Teenage Mutant Ninja Turtles" games, and finally, a terse and triumphant "Contra" re-score in "Vile Red Falcon", well.. this is one sequel that stomps its muddy little squarewave paws all over the original.